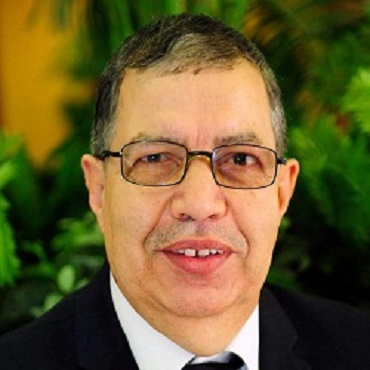 Omar Chaalal is an Associate Professor of Chemical Engineering at Abu Dhabi University (ADU).  Chaalal is an internationally renowned expert in the separation technologies. He is the inventor of the EnPro Process that deals with the sequestration of carbon dioxide and global warming reduction. He has undertaken several successful research related to CO2 cleaning in Natural Gas and subsequently two patents applications have been filed for the use of this technology. The benefits of these patents were, in addition to the environmental benefits, used in the treatment of large quantities of desalinated formation water in the oil field. Chaalal has pioneered among others the use of seawater and ammonia to reduce the effect of carbon dioxide on the environment.  August 2017, Dr. Chaalal  was honored with a prestigious IAAM scientist medal of  year 2017  for notable and outstanding research in The Advanced Material Science and Technology during award ceremony held in Stockholm Sweden in the 23 of August.2017.Chaalal was an associate professor of Chemical Engineering at Ibn Khaldun University Algeria, as well as at the United Arab Emirates University. He was the Chief Scientist of Enpro As. Norway, a member of Al Mobdioon Center of Excellence and innovation of King Abdul Aziz University (Saudi Arabia), an Advisory Board   of IIB environmental Company in Japan and    a member of the board of the Journal of Nature Science and Sustainable Technology (Nova Science Publisher). He has authored 50 refereed publications, 2 European patents, 1 US patent pending and 200 presentations.

There are over 2 trillion barrels of conventional oil still trapped in reservoirs worldwide after conventional recovery methods showed an incapability   to extract them.  Based on these many techniques that involved in tertiary oil recovery were developed. However, most of these technologies limit the further development of oilfields because of their economic restrictions. Recent dramatic fall in oil prices has accentuated the problem. Now, the challenge is to fill out the growing gap between energy demand and supply with more cost effective techniques. Recently, a team of researchers in Abu Dhabi University reported an innovation base on natural surfactants for enhanced oil recovery. NSEOR technique satisfies practically all criteria discussed above.This paper presents this technique as an effective alternative to conventional enhance oil recovery.  NSEOR technique avoids the use of chemical flooding that are harmful to the environment. NSEOR uses two types of plant extracts that increases the total oil recovery to 96% of initial oil in place (IOIP) during the tertiary recovery mode. While water flood recovered around 50% of the IOIP, 0.5% wt of the natural plant extract recovered 77% in the secondary recovery mode. The additives were extracted from two plants available in the United Arab Emirates (Sisyphus Spina Christi plant and Aloe Vera plant.). These natural extracts proved to be very effective in formations containing water with a salinity range of 70,000 to 180,000 ppm with temperature going up to 100 °C. NSEOR laboratory tests have shown very good and promising results.  This new technique has not been applied in many oilfields around the worlds. However, this method did not receive a great attention in the petroleum industry because of its technical bottlenecks. This paper is mainly focused on discussing the basic concept, mechanism, advantages, problems and further trends of MEOR.