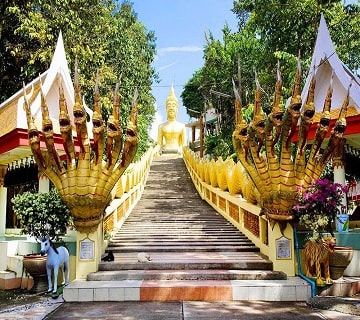 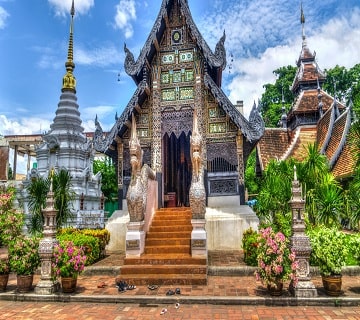 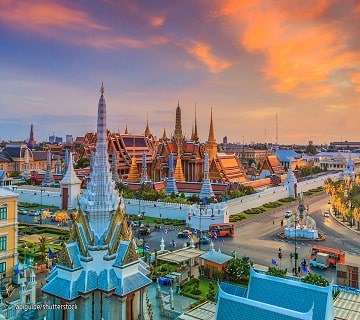 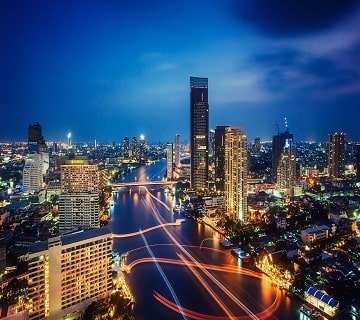 Bangkok, official name Krung Thep Maha Nakhon, is the capital of Thailand and, with a population of over eleven million inhabitants, by far its largest city. Its high-rise buildings, heavy traffic congestion, intense heat and naughty nightlife may not immediately give you the best impression — but don't let that mislead you. It is one of Asia's most cosmopolitan cities with magnificent temples and palaces, authentic canals, busy markets and a vibrant nightlife that has something for everyone. Bangkok is one of the world's top tourist destination cities. MasterCard ranked Bangkok as the global top destination city by international visitor arrivals in its Global Destination Cities Index, with 15.98 million projected visitors in 2013. It has topped the MasterCard Global Destinations Cities Index as the most visited city in the world in 2012, 2013, and 2016. The city is ranked fourth in cross-border spending, with 14.3 billion dollars projected for 2013, after New York, London and Paris. Euromonitor International ranked Bangkok sixth in its Top City Destinations Ranking for 2011. Bangkok has also been named "World's Best City" by Travel + Leisure magazine's survey of its readers for four consecutive years since 2010. As the principal gateway for arriving visitors, Bangkok is visited by the majority of international tourists to the country. Domestic tourism is also prominent. The Department of Tourism recorded 26,861,095 Thai and 11,361,808 foreign visitors to Bangkok in 2010. Lodgings saw 15,031,244 guests, who occupied 49.9 percent of the city's 86,687 hotel rooms, Chinese visitors spend a lot of money and most goes to retailers in Bangkok. Chinese visitors stayed an average of one week in Thailand, spending US$1,000-1,300 each or US$167 per day each. Bangkok's sights, attractions, and city life appeal to diverse groups of tourists. Royal palaces and temples as well as museums constitute its major historical and cultural tourist attractions. Shopping and dining experiences offer a range of choices and prices. The city is also famous for its nightlife, Wat Arun – The Temple of Dawn, The Grand Palace, and Bang Krachao Garden, floating market. The famous universities dealing with Science and Technology development, Bangkok, such as Kasetsart University, King Mongkut's University of Technology North Bangkok.