Be a part of International Conference on Neurosurgery

Dubai is one of the seven emirates of UAE and also one of the world's fastest-growing economies. It is the combination of ancient and modern attractions. Dubai has its own beauty like Dubai Mall, Gold Souk, UNESCO World Heritage Site, Dubai Creek, and Dhows. It is the best city to explore. Dubai has the top Universities in every field. It is one of the busiest travel hubs in the world. There are 90 airlines flying to more than 240 destinations across six continents. Dubai is a global trade Centre to make your future. Dubai provides first-class physical infrastructure and access to an experienced and skilled labour force. Dubai has a significant number of universities and research centres for technological and scientific advancements. Dubai is a safe city for every age. Dubai was ranked the World's 150 most visited cities by international tourists in 2009. Dubai created a record of 10 million visitors in 2012.

Just 5 h from Europe and 3 h from most parts of the Middle East, the Near East, and the subcontinent of India, Dubai makes a great short break for shopping, partying, sunbathing, fine dining, sporting events, and even a few sinful pleasures. It has the largest immigrant population in the world.

Dubai was recently named as the best destination for travellers; Burj kalfia, Burj Al Arab and The Dubai mall are the most famous places in Dubai. It built the first, largest and the biggest constructions in the world. Dubai's dynamics are always changing with construct something better and bigger and new than the older one.

Dubai Metro: It connects the Dubai Airport and some of the major tourist destinations such as the Mall of the Emirates and the Burj Khalifa.

Abras: The quaint aquatic taxis, also known as abras, are a great way to avoid traffic.

Dubai Ferry: The Dubai Ferry is as much a tourist thing to do as it is a public transport system, allowing visitors and residents to view the city from the sea.

Dubai Tram: It is part of a modern integrated public transport system that provides efficient and quick access to the densely populated areas of Jumeirah Beach Residence, Dubai Marina, and the business areas along Al Sufouh Street.

Dubai's gross domestic product as of 2018 was US $102.67 billion. Today, Dubai has focused its economy on tourism by building hotels and developing real estate. Port Jebel Ali, constructed in the 1970s, has the largest man-made harbour in the world, but is also increasingly developing as a hub for service industries such as IT and finance, with the new Dubai International Financial Centre (DIFC). Emirates Airline was founded by the government in 1985 and is still state-owned; based at Dubai International Airport, it carried over 49.7 million passengers in 2015. From 2005 to 2009, trade between Dubai and Iran tripled to $12 billion.

Dubai is the second largest emirate, after the emirate of Abu Dhabi, and covers an area of 4.114 square kilometres, equivalent to 5% of the total area of the UAE. Known as the capital of UAE’s economy, Dubai shares borders with Abu Dhabi in the south, Sharjah in the northeast, and the Sultanate of Oman in the southeast. Dubai lies directly within the Arabian Desert. However, the topography of Dubai is significantly different from that of the southern portion of the UAE in that much of the city’s landscape is highlighted by sandy desert patterns, while gravel deserts dominate much of the southern region of the country. 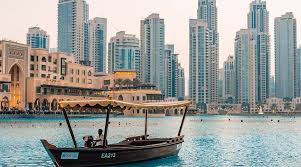 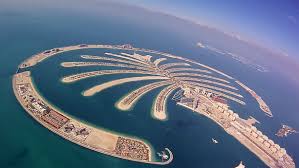