Dubai, also spelled Dubayy, city and capital of the emirate of Dubai, one of the wealthiest of the seven emirates that constitute the federation of the United Arab Emirates, which was created in 1971 following independence from Great Britain. There are several theories about the origin of the name Dubai. One associates it with the daba—a type of locust that infests the area—while another holds that it refers to a market that existed near the city. Dubai is a city of skyscrapers, ports, and beaches, where big business takes place alongside sun-seeking tourism. Because of its large expatriate population, it feels like a Middle Eastern melting pot, and the atmosphere is generally tolerant. The new city centre is a string of skyscrapers lining Sheikh Zayed Road. Notable among these are the Emirates Towers, which were built in the late 1990s and early 2000s and which house a hotel and government offices. Close to Sheikh Zayed Road is the Dubai International Financial Centre, housed in a futuristic arch-shaped building, and the Burj Khalifa, which at the time of its official opening in 2010 was the world’s tallest building; it was named after the president of the United Arab Emirates  and emir of Abu Dhabi, Khalifa ibn Zayed Al Nahyan. The western area of Dubai benefits from small stretches of sandy beaches, which have helped to catalyze the city’s tourism industry. Dubai’s rulers have sought to increase the city’s limited seafronts, and, in the absence of natural offshore islands, developers were encouraged to construct giant man-made islands off the coast of the city. The most famous of these is Palm Jumeriah, which has the shape of a palm tree. Others include the “World” islands, a cluster of small islands positioned to resemble a world map when viewed from above. 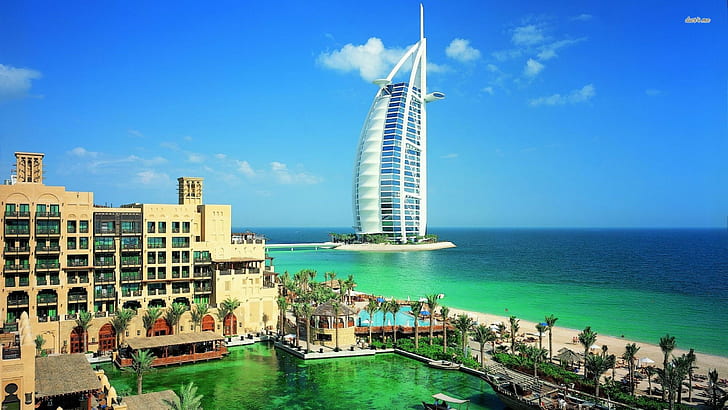